Don't Feel Like Reading Today? Here's A Summary Of The Bosch Jigsaw Review.​​​​

This Bosch jigsaw comes with smooth precision control with a reinforced SPM speed of 3100 SMP max for stable output and Bosch’s signature constant response circuitry. Model JS407E has a tool less blade change design, up to 45 degree tilt motion for bevel cuts and a soft grip handle with increased ergonomics. This Bosch jigsaw effortlessly cuts through any type of material without taking a toll on precision, or accuracy for that matter.

In what seems to be a flawless execution of incorporating the latest technology into a handheld cutting tool, Bosch has definitely outdone the competition. Of course, this is only my opinion where you can beg to differ as much as you like. But I think that the Bosch JS470E 120 Volt Jigsaw is more of a fully fledged product with little to no flaws.

The review attempts to summarize the said model of this Bosch jigsaw in the best way possible. Had it not been a loaner unit, I wouldn’t have to return it early. Sadly, I was on a clock, while also being ecstatic at the same time, I couldn’t explore each and everything. However, this review does come out as a successful attempt at laying out what makes a Bosch JS470E 120 Volt Jigsaw worth buying.

Fun Fact: The concept of Jigsaws come from the, yes, you guessed it right, jig saw puzzle. Many years ago, when there was no such evidence of a toy factory, jig saw puzzles were carved out of wood. Although saws were not present during those times, carpenters used a small blade to cut tight corners on the workpiece. Hence, whichever power tool was released in those days, it was called a jigsaw.

The funny thing is that Bosch has been trying to create jigsaws since early 1940s. In fact, it was 1946 when a Bosch Co. employee attached a small vertical blade at the sewing end of his wife’s sewing machine. He was attempting at creating a portable jigsaw, which was obviously too heavy to carry around. 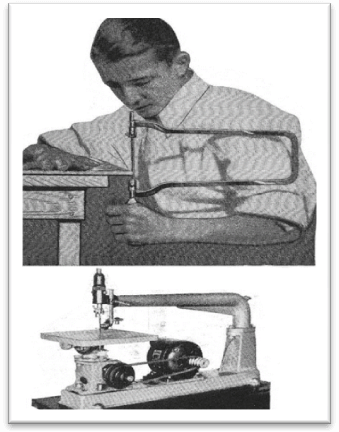 The attempt was successful. The worker was hailed for coming up with an innovative idea which set the company on the path to create the very first working model of the Bosch jigsaw. Years went by, technology evolved, and we ended up with powerful motors, high SPM ratio blades and tons of other perks that make a handheld jigsaw a truly remarkable piece.

A lot of people don’t know about this story. Since I asked around a bit and came to find out how Bosch actually stumbled upon jigsaws, I thought it’d be worth sharing. What we don’t know to this date is whether this poor guy’s wife hailed him as a hero, or got pissed off for messing up her sewing machine.

From a cursory perspective, a Bosch JS470E jigsaw offers an astounding 7.0 Amp motor alongside 120V power consumption. At this rate, the jigsaw churns out an average blade SPM speed between 500 – 3500. It will vary depending on the cut material. If you are cutting wood chips with a relatively lesser density, this Bosch jigsaw will go through everything like a hot knife through butter.

At the same time, the SPM will be a lot lower if you are cutting through aluminum sheets. Yes, that is correct; this jigsaw can be used to cut a wide range of materials, other than conventional wood pieces. The only time I had trouble with precision was when I was using a Bosch jig saw on PT lumber. It was a little rough on PT, which called for extra effort on my part to keep precision factor on the manual side. 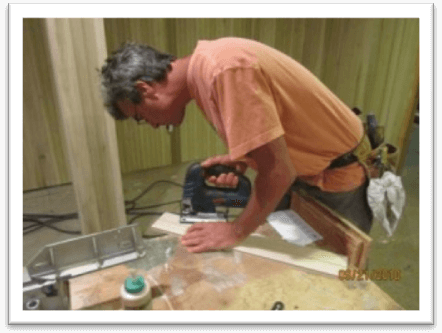 Bosch JS470E 120 Volt Jigsaw comes with a 7.0 Amp motor. The SPM doesn’t take too much load, which enables the jigsaw to cut through wood pieces of up to 5 7/8th inches thickness. As stated earlier, I was successfully able to cut aluminum sheets with this power tool. In latter case, the aluminum sheet’s thickness varied. The jigsaw showed signs of effort only when I exceeded beyond 7 – 8 inches.

I also tested this jig saw on mild steel sheets. The results were okay because steel posed more of a challenge for this bad boy. On plus side, the max thickness of steel sheet was kept up to 3 inches, which was impressive as compared to other jigsaws.

Okay, a good advice for any jigsaw user would be to trace out the path before you go in at full speed. I normally use pencils for straight line cuts. There are plenty of carpenter pencils available at local power tool shops.

Especially, when you have to make curvy cuts in any design or shape, use a marking tool. The path is easier to follow that way. Other than that, you definitely need a lot of practice. The curve cuts will come out as a little sharp and edgy around random points, but that’s usually not a jigsaw’s fault. Bosch JS470E 120 Volt Jigsaw was easier to use over a wide range of movements.

Precision and accuracy become a matter of concern when the work piece density is more than the blade’s capability. Fortunately, Bosch installed the usual orbital speed mechanism that offers 4 speed dial modes. If you know your work piece’s type and density, then you only need to set the appropriate orbital speed.

By the way, the Bosch JS470E model also features a controlled precision feature. It assists in stabilizing the blade speed for accurate cuts. At the same time, the entire experience is noise + vibration free. For thin density material, I was able to hear the distinctive “whirr” sound. Denser work pieces churned out an aggressive sound that can be a little hard to bear with at times.

Unlike other jigsaw models which I have reviewed so far such as the Porter Cable PCE345 or the SKIL 4495-02, the Bosch JS470E comes with a soft grip handle. The overall weight of the entire unit is kept on the light side. I was able to get a solid grip on the handle due to soft rubberized coating.

For further convenience, Bosch has also introduced tool less blade change system. It is very handy because users only have to swipe the release button on the front side of the jigsaw. As a result, the blade simply drops out – just like releasing an empty magazine from a gun.

I particularly liked the effortless blade changing system because Makita 4329K jigsaw’s blade would mostly get stuck on its way in. For some reason, the blade had to be kept in a straight line – otherwise, It’d jam. Bosch probably took notice of such issues, and came up with a simple release lock that takes all other irrelevant things concerning blade change out of the equation.

How Good Is The Orbital Speed Change System?

The orbital speed on Bosch JS470E jigsaw works pretty much like Dewalt DCS331M1. You get your standard dial with  a notch that switches between 4 speed modes. Whichever speed you want, as per the application of the woodworking project, just select it. As a result, your blade SPM will increase or decrease. 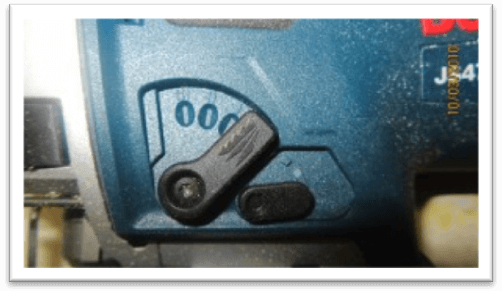 Bosch integrated the traditional orbit with a constant response circuitry. It means that every single SPM makes full use of 120V for even smooth blade strokes. Think of it has dedicating a power tool’s energy to the sole benefit of a woodworker – no half assing, no cutting through tight corners etc.

The only limitation there is to it is the 45 degree bevel angle. Beyond that, you cannot tilt the main jigsaw housing no matter how hard you try. So, be careful while you are trying to carve through the work piece at an angle.

Other Perks Worth Checkin’ Out: 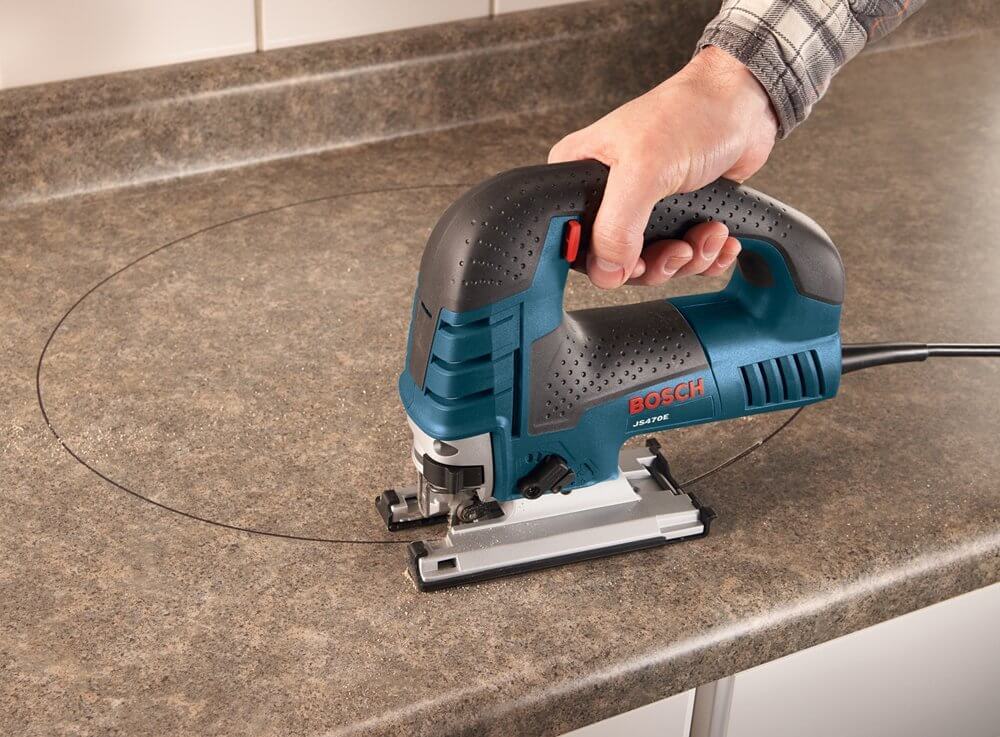 Out of the box, the Bosch JS470E model jigsaw comes in a molded case. It has a visually striking appeal that bespeaks quality. There are couple of extra storage bays for add-on blades and vice versa. The Bosch jigsaw also features a state of the art ambidextrous lock on button. This button is responsible for converting the jigsaw handling orientation from left hand to right hand – and vice versa.

This jigsaw has a diecast steel insert and on-board bevel bench. This is a huge improvement over conventional jigsaw manufacturers who failed to integrate all such features within the same housing assembly. They’d alternatively increase the size of the jigsaw, which made it impossible to operate, or strap on additional components to make each mechanism work.

Bosch Jigsaw and it's Pros

If you are looking to buy a solid power tool from a lifetime investment perspective, Bosch JS470E is definitely made for you. Powered by a robust 7.0 Amp motor and a relentless SPM, this Bosch jigsaw effortlessly cuts through any type of material without taking a toll on precision, or accuracy for that matter.