Don't Feel Like Reading ? Here's A Summary Of The Hitachi Miter Saw Review.

This Hitachi miter saw comes with a 15 AMP motor for uncompromising cuts at approx. 3,800 RPM. Model C12RSH2 is featured with a laser LED projection system for guided cuts and the miter saw exhibits good build quality, dependable performance and some nice visual aesthetics. Regardless of your skill level, as long as you are a woodworker, you will be pleased with what this Hitachi sliding compound miter saw has to offer.

Hitachi is a trusted brand. Do you know how I know that? It’s because I have been using their product, yes, one product only, for the last 14 years or so. My mom bought an old Hitachi vacuum cleaner in the late 90s, and even though the new standards have improved via brushless motor design, upright structure and even a digital dashboard, this old vacuum cleaner refuses to give up.

Talk about long-term product durability. Don’t believe me? Well, how about I update this post later with my personal beat down Hitachi vacuum cleaner pics. For now, let’s focus on reviewing the all new Hitachi C12RSH2 Miter Saw. This is a relatively old model; the reason I called it “all new” is because I have not tried Hitachi power tools before. To be honest, I didn’t want to review the Hitachi C12RSH2 Miter Saw, but given that we have a sentimental value for their old vacuum cleaner, why not give it a shot?

Conclusions are normally the last part of my miter saw reviews, but this one’s an exception. I was satisfied with this Hitachi’s C12RSH2 model to an extent where it is safe to recommend to intermediate level users. The miter saw exhibits good build quality, dependable performance and some nice visual aesthetics. There are other perks too, which I will go through later in this post. 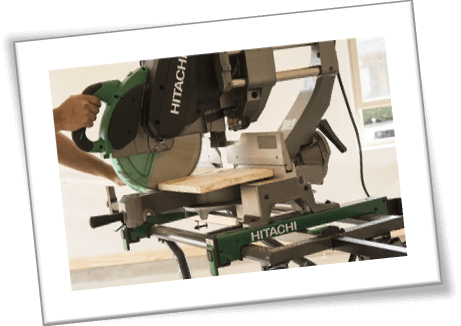 Hitachi has released another miter saw model with slight changes made to it. It’s called the Hitachi C12RSH miter saw, and that specific model offers certain facilities within a very limited capability. You basically get to make the same amount of cuts, but with not as much liberty as the C12RSH2 series. Of course, there is a price difference between the two tools. 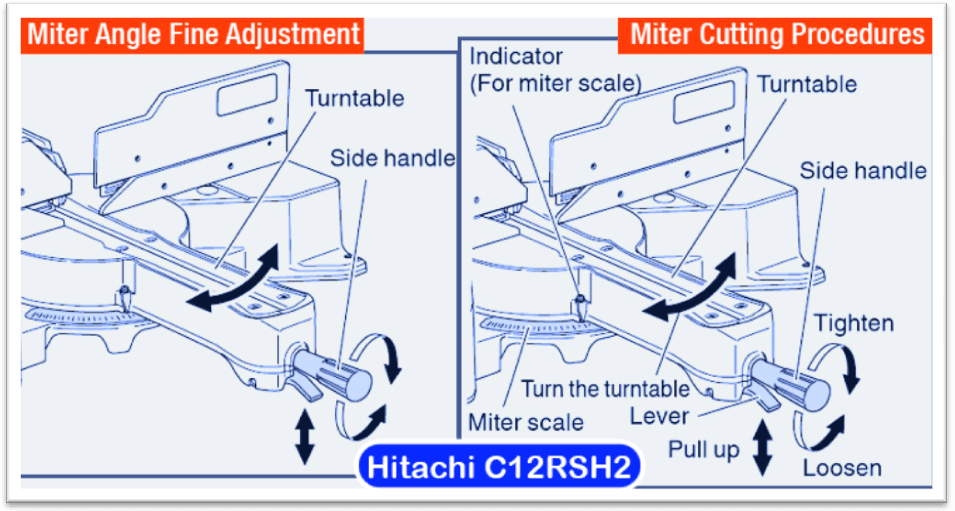 Regardless of the skill level, as long as you are a woodworker, you will be pleased with what this Hitachi miter saw has to offer. I have dabbled here and there with cross cuts, straight line cuts and sliding cuts. The results were above satisfactory. Especially because the miter scale and the tilt blade functions offer possibility to make cuts beyond your usual picture frame styles, the product is worth it.

Why Use the Hitachi C12RSH2 Miter Saw Model?

Possibly, because of the price tag; it is a lot lower than other sliding compound miter saws such as Dewalt DWS780, Bosch GCM12SD or Makita LS1016L for that matter. Just for comparison sake, Milwaukee miter saw cost twice as much when compared to Hitachi product lineup. Ironically, Milwaukee and Hitachi are both offering the laser LED projection system, which is meant to help users refine their cutting technique.

In that sense, the Hitachi miter saw cuts through all the bullpizzle and delivers what matters most – straight clean cuts for woodworkers. Even if you are planning to get by with crown shaped cuts, you can do that with a little bit of practice and technique.

Right out of the box, Hitachi C12RSH2 sliding compound miter saw revs up a staggering 3,800-RPM blade speed. The overall design is incredibly compact, but it still makes it a little hard to lift the miter saw. This is because of the sturdy base design. Hitachi made a solid durable metal base and clamp to ensure that the entire miter saw assembly doesn’t swivel when the cut is being made. 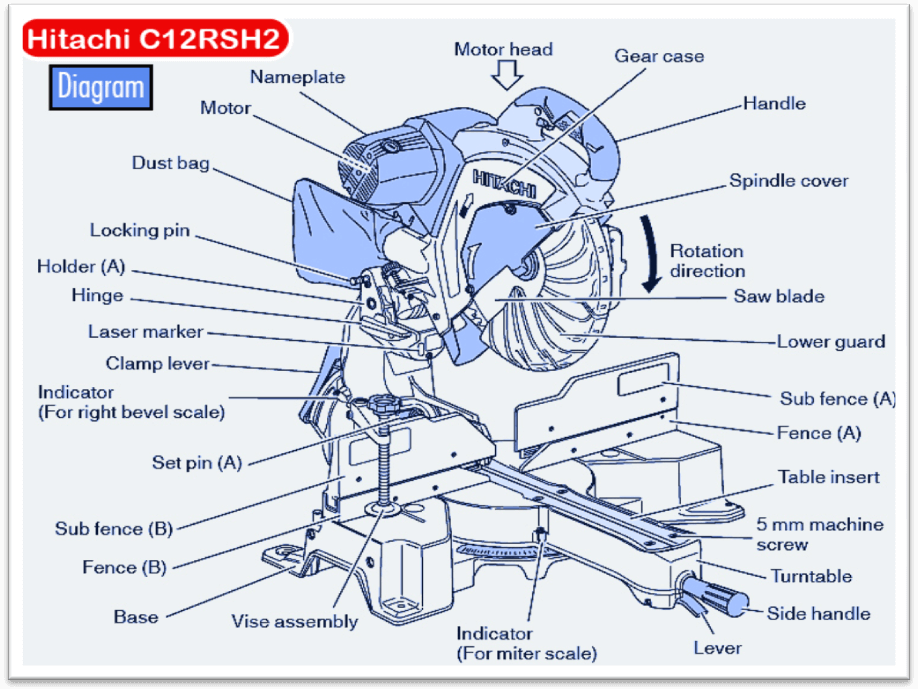 The good thing is that the compact design eliminates the issue of rear side clearance. As for the laser beam projectors, they are installed as standard markers on only one side of the blade. Milwaukee miter saw definitely takes the lead in that context. But then again, Hitachi C12RSH2 miter saw makes up for lack of LED marker positioning by offering a bevel cut degree between 45 – 57 on both sides.

The blade is backed up by a powerful 15 AMP direct drive motor. It means that the RPM speed is not compromised when the miter saw is engaged. However, be careful what you feed underneath the blade. Many users reportedly expressed their appreciation at the sight of cutting masonry tiles, PVC pipes and plumbing pipes, but that causes the miter saw to be physically damaged.

Hitachi incorporated a singular compact slide system in the compact design. Ironically, the singular slide mechanic doesn’t pose any hindrance whenever saw owners have to tilt the arm to either sides of the blade. In fact, for some reason, the scope of reach has become very much extensive. This Hitachi miter saw comes as a fully fledged package with a little to no need for adjustments / early bird fine tuning process.

Here’s a novel touch which hits old woodworkers like me with a wave of nostalgia. Hitachi C12RSH2 Miter Saw has the old school utility access to machine’s carbon brush. You will recognize it if you have been using old manual miter saws from several decades ago. The company also went as far to add a few depth stops and minor flourishing items to ensure that cut’s depth isn’t compromised beyond what’s needed.

That’s a tough question, but in a sense, yes, it is. Hitachi made it more of an open-ended power tool with minimum amount of assembly and disassembly needed on the way. I was impressed to find out that upon unboxing, the miter saw only had two “lose” components, which needed fixing. It is the dust bag and the vice’ the rest is all plug and play.

A good habit, which you should adopt, is to make sure all the screws are tight before turning on the Hitachi miter saw for the first time. Especially make sure that the blade is installed firmly in place because there have been numerous reports of severe injuries caused by end user negligence. As for the laser LED projection markers, they are operable through simple knob turn system. 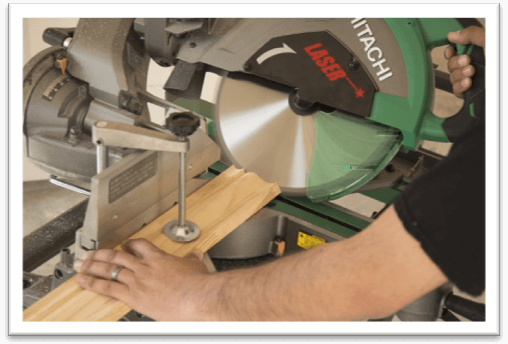 The thing with miter saws is that they need to have rear side clearance for the owners to be able to operate the product. Since Hitachi C12RSH2 Miter Saw has a compact design, space is not an issue.

The good thing is that they are offering a combo stand deal to help increase the portability factor. All you need to do is put the miter saw on the stand and then move it to any desirable spot at your work site.

The stand introduction is a good thing because you are not restricted to keep the miter saw at a fixed spot. In case there are questionably long sheets, the woodworker is able to pull around the entire miter saw assembly because of the table and make space for those sweet cuts. As a unit, portability is no longer a matter of concern for Hitachi miter saw owners.

But then again, the portability is only favorable if you are willing to buy the Hitachi miter saw stand. If there’s no stand, then you will definitely have a problem in the long run.

Ease of Use Vs. Accuracy:

To some extent, ease of use has to be compromised if you are looking to make extremely professional cuts. Given the fact that you might be a hardcore woodworker, you will deprioritize “ease of use” to make cuts at weird, but necessary angles. In that context, Hitachi C12RSH2 miter saw is very accurate.

There is an inbuilt micro knob, which can help you to make simple but severely accurate cuts. The setting angles are easy to lock on to; thanks to the miter scale and the interlocking system. It is, therefore, safe to say that there’s no degree of threat that would otherwise compromise the integrity of a woodworking project.

Now precision is something, which you can only achieve with lots of practice. While it is true that miter saw manufacturers include all kinds of latest accessories and on board features to make cutting a “breeze”, but there’s no substitute for skill and hard work. I tested the saw by setting up the miter on the left side at 45 degrees – and increased to 57 as I moved on.

Needless to say, Hitachi C12RSH2 model passed with flying colors. The work piece was actually just a few slabs of wood of varying length and dimensions. Since the laser projection line was adjustable, I was able to remain on track while cutting aggressively piece after piece. 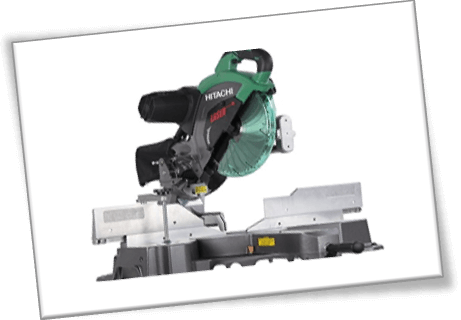 Between the Hitachi C12RSH2 and C12RSH models, both miter saw comes with the ease and convenience to help woodworkers with basic level stuff. If you are just getting your feet wet in the contractors’ world, this Hitachi miter saw is not too bad to start with. You can, however, replace Hitachi C12RSH2 series with a more advanced miter saw model later on.