Don't Feel Like Reading ? Here's A Summary Of The Dewalt Miter Saw Review.

This Dewalt miter saw comes with a blade shadow casting system for accurate cuts and facilitates blade locking for bevel cuts. The cuts on model DWS 780 are smooth and designer standard precise; thanks to the shadow cast XPS system. This Dewalt compound miter saw has a 12 inch blade and runs at 3800RPM, the miter saw also has a state of the art dust collection chute, subpar safety features and a 3 year Dewalt official warranty.

Miter saws have been around in the industry since the 70’s. If you haven’t used one, you should do it right away. Obviously, you’re going to have to look beyond the price tag because these puppers are a little expensive. However, one miter saw is far superior to a table saw over a great range of aspects.

I tried my first miter saw back in late 70’s; everything was god damn manual, but it was worth it. The notion of using a miter saw in that time period was beyond scary. You were dealing with a cutting power tool; OSHA was not there, and so were the safety standards. Things were a little hard to get by, but they were worth it. 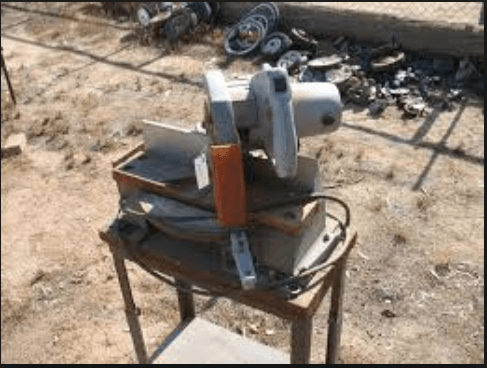 In 1970, one of the most popular model of miter saws was the Rockwell power miter saw. It was a stationary unit because almost all other miter saws used to come with a preset number of features. Rockwell made hand operated products, which made it impossible for carpenters to churn out maximum output over a select number of work hours.

Things have changed a lot today in the industry by now. We have not one, but various different kinds of miter saws. Each one of them are designed to help woodworkers within a certain capacity.

DeWalt Dws780 12 inch sliding miter saw comes with a variety of improvements. It’s price is up north of $500, but the company made sure that the features are well worth the expenses. By the way, there is also another model of this miter saw; it is called: DEWALT Dws782.

Please note that the 782 series miter saw is inferior to the DSW780 model. I know, the number 782 comes after 780, and as a generral rule of thumb, it should have been a superior model, but Dewalt made the DSW782 model as a basic version of the 780.

DeWalt Dws780 is slightly heavy as compared to other companies miter saws such as Makita LS1016L for instance. Out of the box, the power tool weighs in at 58 Lbs., which easily calls for a one time setup and installation. There’s no way that I’d see you wheeling the miter saw around after every few days. Once you have installed it, and the plug is in the wall socket, it is time to use it that way. 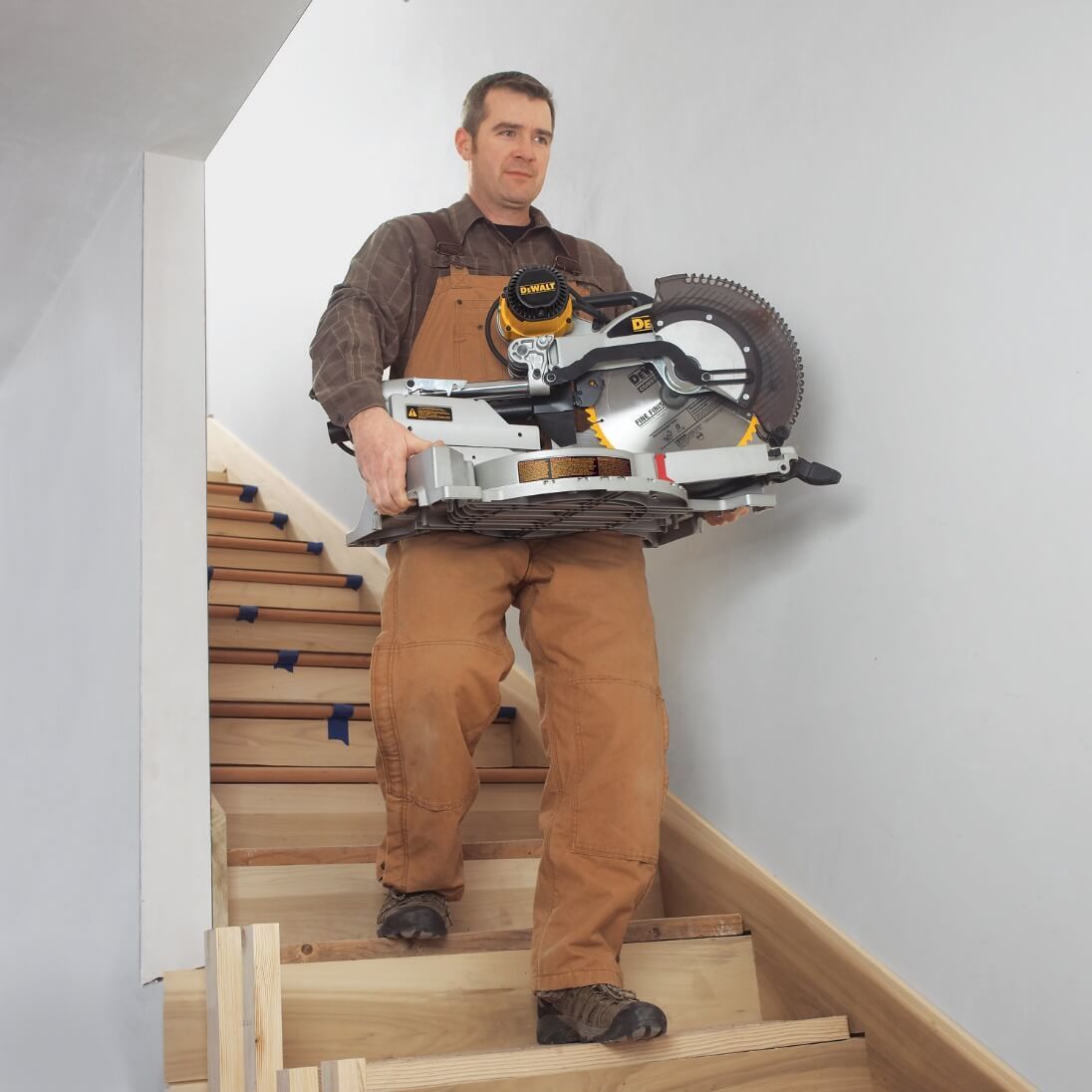 The plastic hinges that sit around the sliding rail are not very durable. They can break anytime – there have been a number of complaints from users who ended up with a slightlyly physically damaged unit. However, beyond these shipping damages, this Dewalt miter saw itself is a marvel to own.

DeWalt Dws780 is ready to go as soon as it is out of the box. If you haven’t spent any prior time with miter saws before, I strongly recommend that you go through the assembly manual. The machine itself is adjustable over a variety of stuff, but if you have never assembled a brand new miter saw before, you need to go through the instructions manual for a crash course. 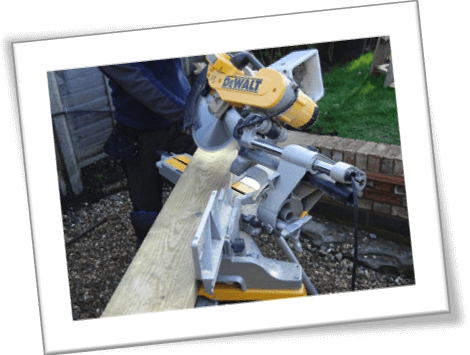 Needless to say, once you have developed enough skill, this DeWalt Dws780 miter saw will help you with not only simple cross cuts, but also complex compound crowing mold cuts at the same level of precision. The next noticeable difference is the laser level cut precision. Dewalt did not integrate a laser guided cutting system in this miter saw such as Milwaukee 6955-20 or Hitachi C12RSH2 have; they could have done it easily.

On the contrary, the developers used a shadow blade guide system for the Dewalt Dws780 12 inch double bevel miter saw. This new system is also called the XPS system. It is designed to cast the shadow of the blade on the area where you are supposed to make the cut. The only downside to this new feature is the angle of the light source – i.e. if it is wrong, the entire cut could be off the mark.

A lot of people are still not comfortable with the blade shadow cut system in Dewalt miter saws. These folks are still using the same old pencil marking technique, but I beg to differ. It is time for new things, and sooner or later, these features will completely take over the carpentry world.

Some users believe that the shadow guided cutting system in this miter saw is a lot better than the “conventional” laser guide approach. It is a matter of choice in the end, so I won’t comment further. The Dewalt miter saw is versatile as you can make a variety of bevel cuts at different angles. You just need to tilt the blade head in the required direction and let the machinery do the hard part.

I know, I haven’t talked about Dewalt Dws780’s design theme at all. I got a little carried away with other features. Visuals are okay; they are your usual yellow on black color theme. Dewalt made the overall ergonomics factor in lieu with the usability.

I will say this that if you are choosy about visuals, then this miter saw does not have a lot to offer. On the flip side, it has excellent build quality for as long as you don’t end up with a unit that got damaged in shipping.

On a scale of 1 to 10, I’d give a solid 9 to the DWS780 Dewalt miter saw. The engineers seem to have spent a lot of time on improving upon the efficiency and usage related stuff. For instance, making a straight line cut is easy; you just have to place the wood panel on the board and then lift up the blade head.

Then you need to pull/ slide the head towards you and force it down the panel. The motion needs to be in front to back style. It may require a bit of getting used to, but once you have the basic positioning in mind, the rest will come easily as a second nature. Dewalt’s strongest point with this miter saw is that they have made positive stops which are installed at fixed positions. This eliminates the inconvenience of finding the right angles for bevel cuts.

For professionals, such as myself, these usability improvements mean that I am able to take on bigger level projects easily. For instance, cabinets and shelving related cuts can be made in one go without having to flip over the wood panels. You are also able to cut all kinds of baseboard pieces up to a cumulative dimension of 6-3/4” of height.

As for the depth, the blade can be dipped to 12” inches or so, but it depends on the wood type. However,  do bear in mind that exerting extra pressure on the blade head will not make things easier or faster for you. Dewalt Dws780 users generally make the same straight line cut in two passes. The first one is done with minor level blade depth, while the second cut in back to front motion is done at full depth. 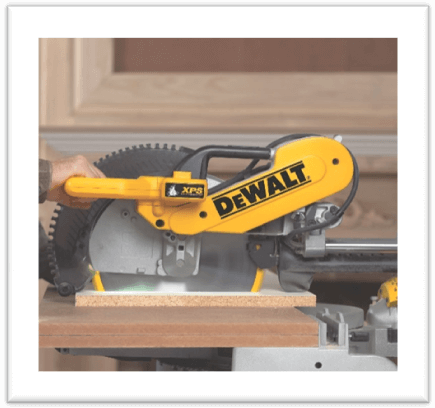 You will notice that this Dewalt miter saw rotates effortlessly like a tank’s turret. The good thing is that Dewalt introduced a lock level system which holds the rotator head in position. It is a big relief for many previous miter saw users because they had to lock the rotator head manually through knobs and screws.

This is where there is a bit of debate going on. Safety features in Dewalt Dws780 miter saw are subpar. They are satisfactory as long as you are looking for a standard blade guard, but that's about it. Some so called enhancements are notch locks etc., to prevent injuries but I think Dewalt could have worked on this aspect of the miter saw since this is a power tool that we are dealing with.

This next feature is kind of within grey boundaries because I wouldn’t label it under “safety” section, but Dewalt added a cool new depth of cut lever. What it does it that the level can be pulled down to prevent the blade from cutting entirely through the material. Likewise, you can make a dado cut across the cut material without ever needing to replace the stock blade with a dado blade.

Cons Of The DWS780 Model

Closing Thoughts – To Buy or Not to Buy Dewalt Dws780 Miter Saw?

Dewalt Dws780 12 Inch double bevel sliding miter saw sits between most affordable and expensive miter saws in a very decent fashion. The cuts are smooth and designer standard precise; thanks to the shadow cast XPS system. Make sure that you are buying this Dewalt Miter Saw at your local DEWALT vendor shop instead of purchasing online. Since the miter saw weighs a lot, it is susceptible to shipping damage, in which case, the company is not entirely held liable. If you want a more in depth look at how miter saws work make sure to read our miter saw tool guide.