Are You In A Hurry? Here's A Quick Summary Of The Bosch Table Saw Review.

This Bosch table saw comes with a power house of a 15 Amp motor with approx. 3,600+ RPM speed, a dedicated wheel lock table, multiple on board storage options for accessories and tools and a dedicated lock mechanism for fence locking. This Bosch 4100-09 model with its 40 tooth blade is an extremely high build quality 10 inch table saw that will mercilessly cut through anything you will throw at it.

Bosch is a trusted brand with a long line of satisfied customers from all across the world. I am not over exaggerating anything; the company’s reputation supersedes its products in many cases. On a personal level, I got acquainted with Bosch for the first time when I bought an AC power shoe. It lasted longer than I expected, which made me to have faith in Bosch over the following years.

Today I have the distinct pleasure of reviewing Bosch 4100-09 worksite table saw. It is not only a marvel to look at, but this Bosch table saw also works a lot more than what the masthead says. There are tons of hidden features in this power tool. You may not notice them as first as a newbie, but as soon as your improvisation skills improve, there is a lot of room for creativity in this product.

Needless to say, the wood slab cuts were smooth as butter – and that too without any internal burn marks, or slight angular disfigurements which can easily occur in case of other conventional table saw models.

Bosch also did a remarkable job with the stock table saw stand. I’ll talk more about it later; for now, let's see what this table saw has in store for potential users.

Bosch relies heavily on quality over quantity ratio. Their products run out of stock quickly in the market due to the demand factor. The business takes its own time to develop, field test and retail each table saw batch without compromising the overall quality factor. This causes supply to run thin, but whenever a new batch is released, the complaint factor is very low.

I am convinced of the Bosch 4100-09 table saw quality because I also tried their CSW41 circular saw and the Bosch JS470E 120 Volt Jigsaw, which were splendid products in its own way. 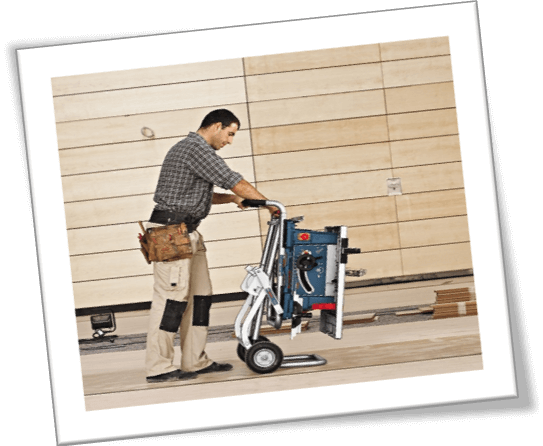 In case you didn’t know, SKIL 3410-02 and the Bosch 4100-09 are basically from the same companies. One is acquired by the other to help cover more ground in the market. However, while doing so, both Bosch and SKIL run in a friendly competition against each other. This practice also leaves a lot to be desired for. Bosch sometimes “forgets” to introduce key enhancements to the company’s power tools; whereas SKIL picks up where Bosch leaves the gaps behind.

This is kind of like a duo, where both companies are trying to convince people to buy either Bosch’s or SKILs products for the lack or excess amount of features. The logic is weird but that’s how Bosch has been working for the last couple of years. 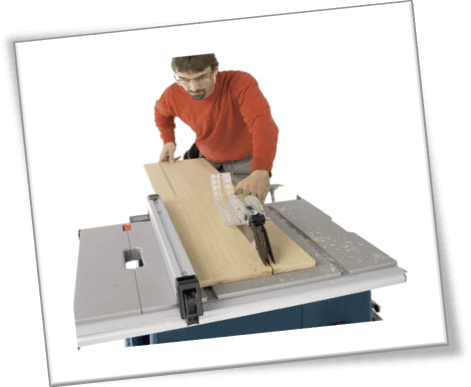 Right off the bat, Bosch 4100-09 10-inch worksite Table Saw has an amazing coverage area to offer to homeowners and contractors alike. The table saw’s top surface area comes with the complimentary addition of a high quality rip fence to help make those accurate cuts in no time. I was a little skeptic at first of the Bosch 4100’s blade output capacity, so I went along with small cuts.

Biscuit joints came out super clean and accurate. I also noticed that the individual slab cut quality didn’t deter no matter how low the clearance area was maintained. Regardless of the total 3,650 RPM output, the blade was able to chew across bigger pieces of wood with dense depth core.

I wrote a bit about the fence’s quality in the above paragraphs. However, I figured out that I was missing out on some important details. Bosch 4100 Rip Fence deserves a dedicated section in this review.

The rip fence is made out of fabricated aluminum. Sliding it up and down or in left to right motion across the rail is silky smooth. The fence can be hard pressed against any slab type without having to worry about it breaking or bending under pressure.

What you don’t want to do is maintain a direct limb contact with the slab at the side opposite to the fence. Things can go awry in no time, regardless of the type of safety material. The SquareLock Rip basically keeps the slab fixed in one position making it easier for users to carve out cuts of their choice.

While the fence’s quality and performance is really good, I have to disagree with Bosch 4100 saw’s miter gauge. It feels frail, and when operated in a hurry, the gauge lets off squeaky sounds; the type that you heard from made in China crap. There is room for improvement as far as miter gauge on this table saw is concerned.

A better alternative would be to buy after market Bosch table saw parts. They are easily available online or at local retailers. Sometimes table saw manufacturers don’t pay a lot of attention to the quality factor for miter gauge, rip fence, cranks and such other parts. That’s where you’re going to have to scavenge for suppliers in the open market. Amazon may not have some good deals, but eBay has tons of variety of such spare parts.

Obviously since this is a table saw, the safety mechanism was essentially introduced as a SOP by Bosch. They slightly went a step further by adding in a riving knife guard. Although the riving knife is positioned behind the circular table saw blade, there’s no telling when or how accidents can happen.

The blade guard cover is movable due to pivot point installation. It goes up and down, and can easily be detached whenever needed. Another thing which I wanted to talk about is the Bosch 4100-09 riving knife; it helps to prevent kick back incidents.

Yes, they are equally common in case of table saws too. Sometimes when the blade tugs or pinches on a particular part of the wood, the piece can fly up towards you, or in a motion away from your body; the knife, in this regard, keeps things under control due to its upward elbow shape.

Anyhow, the entire build quality is impressive. You get a spare set of everything ranging from wrenches, blade guard, washers and spanner keys for tightening + loosening the riving knife screws. The table saw also has a separate gauge meter which needs to be installed at the lower half area on the front side. It is hard for me to explain everything without visual cues, but you will get a rough idea of how to place and install everything correctly. 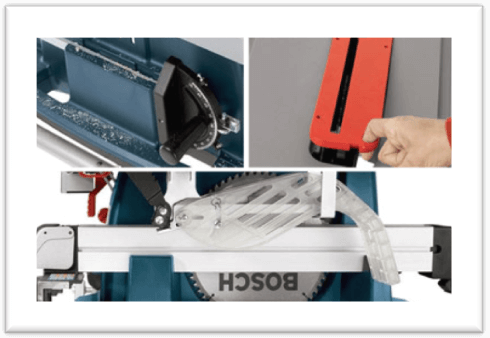 It is safe to say that Bosch also allows free blade movement on  its table saws just like competitor products. I tried Makita 2705-10 and DeWalt DW745 table saws before; their blades could lean on either side due to the crank shaft controller underneath the blade assembly.

Bosch 4100 table saw blade can be set at any position for as long as the resultant angle is between 0 Degree to 45 Degrees. What’s better is that you can lock the blade in position so that bevel cuts can be made easily without the indication of any marginal errors.

When compared directly against Makita and DeWalt table saws, Bosch 4100-09 model offers a 40 toothed saw blade. This one’s much heavier and leans a lot on perfection, precision and speed. Pine and plywood were the easiest to cut through; oak wood posed a bit of a challenge but I managed to chisel across by rerunning the same slab at different blade heights.

Bosch On Board Storage:

This Bosch table saw comes with a complete range of on board storage materials. Most of the compartments are pre-designed to accommodate the storage of spare parts that come with the Bosch 4100 table saw.

You can, however, make a separate wooden cabinet with drawers for additional storage. Since they supply each brand new customer with a dedicated wheel lock table for the table saw, there is enough clearing room between the table’s leg to conveniently slip a small cabinet underneath it. Many YouTubers have made home videos where they show off their storage cabinets for table saw tools.

The interesting thing is that Bosch went for an unbiased approach when it came to storing additional accessories within the body of the table saw. They made sufficient room for different blade sizes, wrenches and pliers. Had it been some other company, they’d have pushed for exclusivity crap so much that you’d have to buy company specific spare parts to use the onboard storage bays.

Pros of this Bosch Table Saw:

Bosch 4100-09 table saw is one of the best table saws to date . I have not yet reviewed ​SKILSAW STP99-11 and other company brands that fall within the same price range. Therefore, for now, I can vouch for this product’s long-term performance. This Bosch table saw has a power house of a motor, and when backed up by 40 toothed blade, it will mercilessly cut through anything you will throw at it.