Don't Feel Like Reading? Here Is A Summary Of The SKILSAW Table Saw Review

The Skilsaw table saw comes with a worm drive motor which produces impressive results. The STP99-11 table saw has more torque and a higher RPM rate. The saw comes with an array of tools to make cutting through dense pressure treated sheets like a walk in the park. It comes with a rolling wheel stand and changing blade positions is easy. This Skilsaw table saw also has a dedicated dust collection and emission system and fulfills the needs of both homeowners and hardcore woodcutters equally.

Whether it’s a great circular saw or a powerful table saw, as long as it’s associated with the Worm Drive category, you are looking at twice as much work output. Of course, the speed of these worm drives doesn’t affect precision at all. The only cases that demonstrate sloppy performance are the ones where power tool manufacturers combine a worm drive system with low quality parts.

Recently, I had the distinct pleasure of reviewing Skilsaw SPT99-11; a bodacious domestic booty-kicking table saw with tons of perks up its sleeve. This review is also more of rant where I talk about Skil’s previous products and how things are looking up in the power tool market these days.

They call it 99 table saw for tons of reasons. Skil released this 3410-02 product for professional enthusiasts who are looking to make a decent one time investment in a solid deal.

This Skilsaw table saw may be a little expensive, but if you are willing to give SKIL a shot, you are in safe hands. The worm drive comes as a basic version of the ever popular Skilsaw SPT99-12. The latter has beefier specs and a slightly bigger circular blade.

The reason I chose to review this SPT99-11 model instead is because this is where it all starts. It is the foundation model of a couple of superior quality SKIL Co. table saws in the industry. The SPT99-11 is comparatively popular because it tends to fulfill the needs of both homeowners and hardcore woodcutters equally. 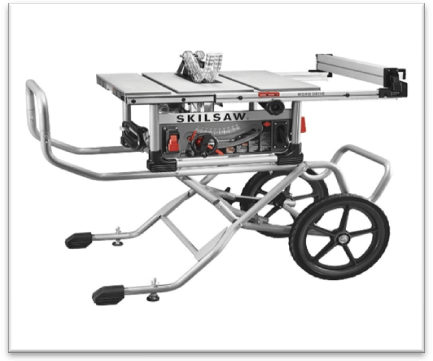 As the name suggests, Skilsaw SPT99-11 possesses a worm drive motor. While this motor gorges on higher electricity voltage, it produces equally impressive results. This table saw has more torque and a higher RPM rate. The material cuts easily at 2x to 4x times the speed of a regular direct drive table saw.

Right out of the box, this table saw comes with an array of tools to make cutting through dense pressure treated sheets like a walk in the park. The motor remains stable; it doesn’t emit that sudden loud noise when blade binding is imminent, and the blade rips at a uniform rate.

How Does Skil Ensure Precision?

Generally, table saw precision is based on a few factors – i.e. blade positioning, riving knife positioning and fence movement system. For their SPT99-11 model, Skil used a rack and pinion style fence system. In my opinion, this is a good move; it’s better than rail rack and static rack of course. To top it off, Skil also infused the fence lock mechanism for you to keep the fence sitting tight at one particular place while you carry on with the cutting.

The rack and pinion fence moving needs a bit of getting used to. If there’s a lot of friction during the first few days of your purchase, don’t forget to use a bit of high quality machine oil. Grease sounds good too, but it attracts mold, which causes material deterioration over time.

In case of the Skilsaw SPT99-12 table saw model, the company further improvised the fence movement system by a few notches. The upgraded model offers up to 30 ½ “ rip cuts easily. Likewise, the fence mechanism is so enhanced that its precision and quality persists even when you are making razor sharp shave cuts.

On a side note, the blade doesn’t leave any burn marks inside the area where the cuts are made. You can further avoid these burn marks by exerting less pressure on the cut material from both sides. I noticed that pressing any range of wood types hard against the blade and the fence causes the blade to overheat. This results to a visible dark brown or black trail of burn marks along the lining of the cut. 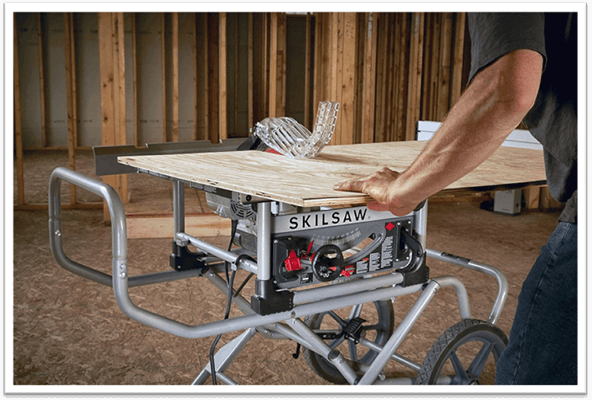 Just bear in mind that regardless of whether you are using the Skilsaw SPT99-12 or the Skilsaw SPT99-11 table saws, the support swings into a lower position flush alongside the entire table. This is to make sure that you are placing the entire cut material on the correct and leveled plane.

Just like its counterparts, Skilsaw SPT99-11 worm drive table saw comes with a rolling wheel stand. It is convenient when you think of it because worm drive power tools weigh slightly more than the regular ones. Therefore, movement and transportation is no longer a matter of concern. What you don’t want to do is mess up the movement on stairs while going up or down your job site.

While I was reviewing this table saw, I normally avoided moving it. I like to setup camp at one side of the garage and work there mostly. However, I did try moving this table saw just to test the stand’s fluidity and movement. It was impressive. As compared to other models such as the SKIL 3410-02 , the handles felt concrete and the rubberized tires moved effortlessly without producing any noise or resistance.

Changing blade positions is easy. I am talking about axis position changes to left and right side for diagonal cuts. Also, the blade can be locked in place to avoid injuries without compromising on the accuracy.

I noticed that the crank for blade height adjustment had to be turned a lot. Further inspection revealed that Skil used two gears that were basically positioned in opposite directions. One gear is horizontal, while the other crank gear is vertical. The movement of one gear causes the other gear to rotate on its axis – hence pushing the blade up, or down accordingly.

The good news is that all gearing is metal. SKIL used high quality groove engraving to make sure that the crank doesn’t wear out over years of constant use. The SKILSAW table saw blade also responds without any hitches as long as you keep applying a dab of machine oil after every few weeks or so.

This is a specific part of a table saw, which you can work without – should you choose to continue that way. Since a dedicated dust collection and emission system is there in the table saw, you can get by with a squeaky clean workplace 24/7. 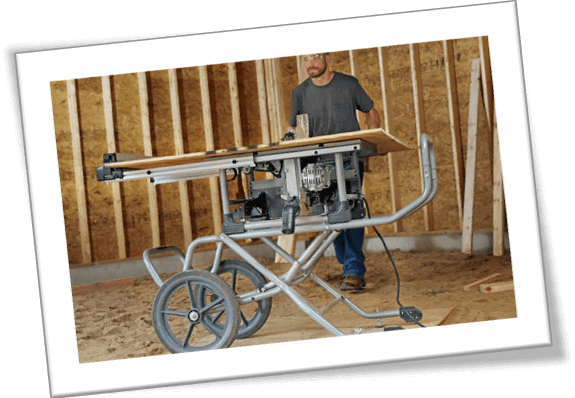 At the end of your shift, you only need to loosen the thumb screw at the back of the dust port to remove any clogs or debris deposits.

You also have the option of redirecting the saw dust collection elbow’s position to a bucket under the table saw stand. Either way, it is a win win situation for saw owners.

The miter gauge build quality is not very good. However, this Skilsaw SPT99-11 gauge demonstrates accurate reading with clear engraving, so that comes as a big relief to me. The last time I reviewed Craftsman Evolv table saw, its miter gauge was a huge pain in the ass. The blade was also misaligned by a little over an inch, which basically means the whole world’s worth of difference to table saw users.

I should mention clearly that Skilsaw SPT99-11 model uses an inferior quality miter gauge. It is your typical “made in China” cheap T-rail design plastic that can break anytime. I’d rather have you searching for a good quality replacement part from the aftermarket.

Eventually, it all boils down to a table saw’s ability to aggressively cut through any range of wood – and that too without taking a toll on the accuracy. In this context, the Skilsaw SPT99-11 worm drive table saw clearly demonstrates some impressive results.

I like to think that part of the credit goes to the 32 toothed diablo carbide tipped blade. Carbide is tough; it is resilient, and enables users to cut through a long range of material easily. They backed it all up with a robust worm drive motor so that the blade doesn’t “shudder” whenever you are hastily feeding wood in there while disregarding the table saw’s ability to manage all that crap at the same time.

Had Skil used a direct drive motor, the whole exercise would have been futile. The combination of the particular motor and carbide tipped blade is a good thing. The only downside to this whole equation is that once carbide bends out of shape, you will need and expert to perform the repairs, or replace the entire blade with a new one.

SKIL is a remarkable company that draws worm drive and direct drive motor lovers from all parts of the world. The company’s SPT99 series is no exception as it incorporates a powerful display of accurate cuts at a comparatively higher RPM. I don’t see any reason to down vote this SKILSAW table saw, except for the price factor. However, if you think of it, quality doesn’t have a price tag; it’s a matter of making an investment for power tool lovers.

If still in doubt which table saw to buy make sure to read our detailed table saw tool guide or our in depth table saw comparison review.